'Off the Rails' is the perfect location whether you are a railway enthusiast or just a holidaymaker enjoying the fantastic range of things to do in this very special corner of the Highlands. From the daily passing of the Scotrail Diesel Sprinters to the occasional steam train there is always something to see from the Station. Each year sees another programme of great railway journeys with the Royal Scotsman, part of the famed Orient Express company. The train makes regular stops at Plockton, and normally remains overnight at the end of the line in Kyle.

The Steam Trains through Plockton

12th April 2010 saw the first steam train visit of the year. The Railway Touring Company  arranged a round trip from Inverness  hauled by the former LNER K4 2-6-0 61994 ‘The Great Marquess’ which passed through Plockton enroute to Kyle before returning to Inverness mid-afternoon. It was packed with enthusiasts who enjoyed a wonderful excursion from Inverness,  on a beautiful sunny spring day.  The picture below is of the 'Great Marquess' flying past 'Off the Rails' at a steaming 50mph! 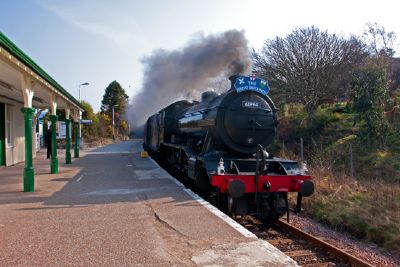 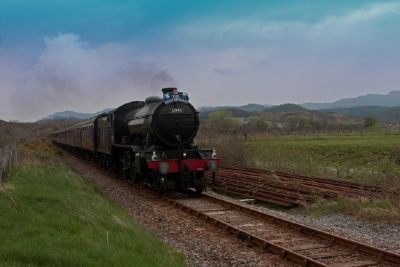 The great steam trains were back in 2012 when the Grand Marquess returned to the west coast in April on a day excursion from Inverness to Kyle. The train, packed full of enthusiasts and visitors is seen passing through Duirinish Station enroute to Kyle having passed 'Off the Rails' in Plockton a few minutes earlier. Why not book a stay at the station and watch the trains go past your own bedroom!

2014  again saw  the Royal Scotsman travelling via Inverness on the Kyle line, with stops in Plockton, where visitors can take a tour to Eilean Donan Castle nearby, or join the 'Sula Mhor' in Plockton harbour for a private cruise to see the seals on Calum's famous Seal Trips. Generally the Royal Scotsman is hauled by a former British Railways diesel locomotive, with its classic carriages unchanged in the many years since they first appeared across the UK, the very essence of luxury rail travel.

The Jacobite on the West Highland Line

From May to October the 'Jacobite' steam train plies the famous West Highland Line from Fort William to Mallaig. This, like the Inverness to Kyle Line, has been voted as one of the great railway journeys of the world attracting hundreds of visitors and enthusiasts each week. Operating daily the Jacobite is operated by  West Coast Railways and is a must for anybody wishing to step back in time to the golden age of steam. If you are coming to 'Off the Rails' by train then why experience this wonderful journey of just over two hours, stopping off at Glenfinnan, home of the famous viaduct of the Hogwarts Express of the Harry Potter movies. Full details are shown on the West Coast Railways website. 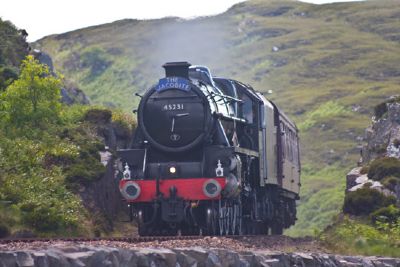 The Inverness to Kyle Line

The famous Inverness to Kyle Line has been consistently voted as one of the great railway journeys of the world, and has been featured in numerous  television and film productions over many years. And to think that this famous railway line passes directly by your bedroom window. The line has many followers worldwide, and even has its own enthusiasts website, packed full of information, news and galleries, as well as gifts and memorabilia. Click the Kyle Railway website for all you need to know about the Inverness to Kyle line.

The diesel  rail service between Inverness and Kyle via Plockton is operated by the First Group. Full information on all the services is shown on the Scotrail  website. 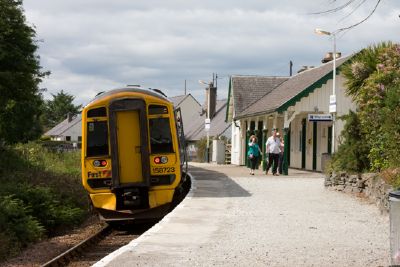